It's only gonna get worse from here; we're heading for a ten day plunge into a cold snap. Single digit highs over the weekend.


jodi
Ugh. I was hoping we would miss the dip, but apparently not. 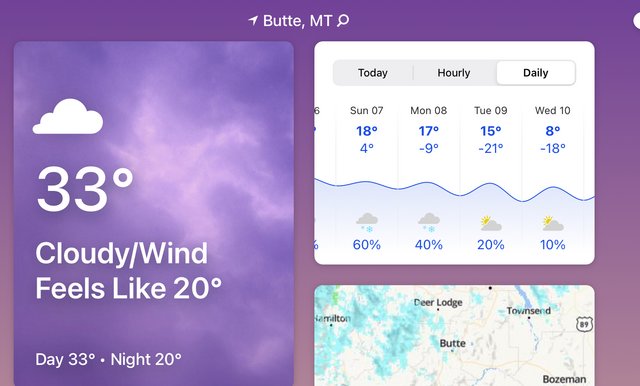 wtg
Whoa. Your nighttime lows are gonna be way lower than ours.

Actually, this forecast is a little more optimistic than the one I saw this morning.

But in any event, you win.


CHAS
Come to the balmy Rockies at 9000 feet.
Low over the next four days will be 16F.
In the 20s after that.
More snow later today.

A: The bull has the horns in front and the ass in the back.


RealPlayer
In 20s and lower here at night. House is warm enough, but our kitchen baseboards never heat up well. We have a space heater in there (only in use when I am cooking dinner).

Mary Anna
It's 38 F and raining, dipping into the upper twenties tonight.

Nina
We really haven't had much winter yet... one day of snow, gone the next. We seem to be hovering in the wet 40s for the foreseeable future.
wtg
It's 10 o'clock in the morning and the temp is -3. I don't even want to look at the wind chills.

I'm thinking I may skip my daily walk today...


Mary Anna
WTG, your air mass is dipping south. The temps have been dropping all day, along with a constant drizzle. There has already been a big pileup on the highways in OKC as ice accumulates on the road, and we've got snow predicted for six out of the next nine days.

I'm glad Quirt has us stocked up on food!

rontuner
We've gotten out walking most days - I think it got up to 6 today without much wind, so it was very nice!

I haven't even broken out my "supercoat", a bulky down-filled wonder that would be best for sitting in some stands watching a football game in a deep-freeze. I did use it during the last polar vortex where the actual temps dropped way below zero..

wtg
I saw news coverage of the accidents in OKC; ice is the worst.

Like ron, I've been getting out for walks despite the cold, but I've broken out the warmest LLBean jacket that I own. It was 16 here today, so it felt positively balmy. Or maybe that was just me....

It was definitely a memorable experience.

You have until this evening to prepare for this storm!

Snowfall totals on average 8 to 10 inches across most of central OK. There will be some locally heavier amounts as you see on this graphic I posted.

The cold is a big deal!! You can expect record cold temperatures and very low dangerous wind chill temperatures with this storm.

Temperatures will drop to below zero with wind chills from -20 to -30 very possible!


Steve Miller
Quirt and Mary Anna, do you guys have a generator? News reports here say power is out all over TX and OK.

wtg
We've had about 28 inches of snow over the last two and a half weeks.

We're getting more tonight, some areas up to a foot (it's lake snow).

quote:
Lightfoot said the Chicago Public Schools also will be tracking weather developments closely throughout the day on Monday, and will make an announcement no later than 5 p.m. regarding in-person classes for Tuesday.