well-temperedforum.groupee.net
Latinx
This topic can be found at:
http://well-temperedforum.groupee.net/eve/forums/a/tpc/f/9130004433/m/9813967497
Qaanaaq-Liaaq
Latinx
Did I miss something? Where did this word “Latinx” come from? It seems to have replaced “Latino” as the preferred word. I see it everywhere now. I don’t see Caucasionx, Blackx, or Asianx being used anywhere.
Mary Anna
The "x," as I understand it, is an acknowledgement that, in Spanish, the suffixes "o" and "a" denote gender. Using "Latino" for the entire group leaves out women. Using "Latina" for the entire group doesn't help, because it leaves out men. Using "x" is meant to include everybody.

English doesn't use suffixes to denote gender, so "Whitex" or "Blackx" wouldn't make any sense.

Piano*Dad
I see it but don't recall actually hearing it.

In any case, it's pretty cumbersome. Sort of like fisher people, or ombudsperson.

ShiroKuro
MA is correct, "Latinx" is advocated as (and being criticized for, depending on who you ask) being a gender neutral alternative to "Latino/Latina."

In terms of the "x" usage, I see several of my Spanish-speaking colleagues writing "folx" (instead of "folks") and when I asked about it, it was explained as a way to normalize Latinx, or to normalize the use of "x" as a gender-neutral plural form. Which, as a linguist, is fascinating to me.

One Spanish prof I know (who is male, from Spain and in his mid-50s I believe) rants about Latinx, he hates it. He thinks it's only supported by people who are either S-E bilinguals, or English native speakers who speak Spanish as an add-on... So he thinks the "x' is not "authentically" Spanish, esp. because you can't really pronounce it with Spanish pronunciation. In one sense, he has a point (re the pronunciation), but the bigger thing that I see is that this is an argument between Spain-spanish and Spanish of the Americas. And ultimately, it's an example of language ownership -- who gets to decide how Spanish changes? He's basically arguing that Spain-Spanish has the most authenticity, and that just because someone in the Americas speaks Spanish (perhaps even as their home language, or first language), that doesn't give them the right to try to change Spanish.

The problem is, the ship has already sailed. Spanish is changing, and its speakers in the Americas don't really care about his take on Spain-spanish....

ETA: also I included the prof's age above because I think this is also at least somewhat generational, the Spanish profs that I know that support use of Latinx are all a generation younger than this prof....

Only if you're not used to it. And it's Latin-Ex (in my dept anyway), and AFAIK when people are speaking Spanish, it's pronounced however the X is pronounced in Spanish (Latin-eques? I'm not remembering)

Also, re your other examples, just say "fisher" or "ombuds" -- easy-peasy, gender-freesy.

jon-nyc
Much of what SK said is true. This is also true:

In practice it serves as a status marker among a certain segment of the woke left.

Most Latinos have never heard the word, and far more actively dislike it than use it. Most of the people who do use it are not Latinos.


If I were cynical, which of course I'm not, I'd say it's a fair bet that most users of the word have Latinos who clean their houses or mow their lawns who's last names they don't even know. (or if they're too young for either, they are taught or edited by such people)

jon-nyc
It's worth noting that all three of my uses of the word 'Latino' in the above post were gender neutral. Obviously so but not performatively so.

quote:
In practice it serves as a status marker among a certain segment of the woke left.

Most Latinos have never heard the word, and far more actively dislike it than use it. Most of the people who do use it are not Latinos.

If I were cynical, which of course I'm not, I'd say it's a fair bet that most users of the word have Latinos who clean their houses or mow their lawns who's last names they don't even know.

In all seriousness, the classism at play is worth considering, but the people I know who advocate for Latinx are native speakers of Spanish.

In any case, if you're in favor of getting rid of the generic he (as I am) then Latinx follows those same ideas.

Latinx has been around for a fairly long time, but I think it's really starting to get more attention recently. It will be interesting to revisit the question in another 10 years and see whether it's become more common, or fallen out of favor.

Horace
Many of our current woke cultural ideas did in fact originate in isolated elitist academic circles. "Critical Theory" which used to be found in academic papers that weren't seriously peer reviewed much less read by a broader audience, has found its way into our progressive pop culture. However, that adoption by a wider audience does not validate the ideas.
ShiroKuro
Not sure why, but Jon's posts read as discussion-y to me, while Horace's come off as hostile somehow...

Horace
The only reason you don't voice hostility is because you don't deign to interact with those whose ideas you are hostile to. That does not mean that hostility towards ideas held by huge numbers of people does not reside comfortably within you.
ShiroKuro
Are you talking to me?

quote:
Originally posted by ShiroKuro:
In any case, if you're in favor of getting rid of the generic he (as I am) then Latinx follows those same ideas.


Which is a bit of an odd project considering Spanish and Portuguese are gendered throughout. But again this is largely an Anglosphere-driven project.


I find it interesting and a little encouraging that even Vox's Matthew Yglesias is critical of this. 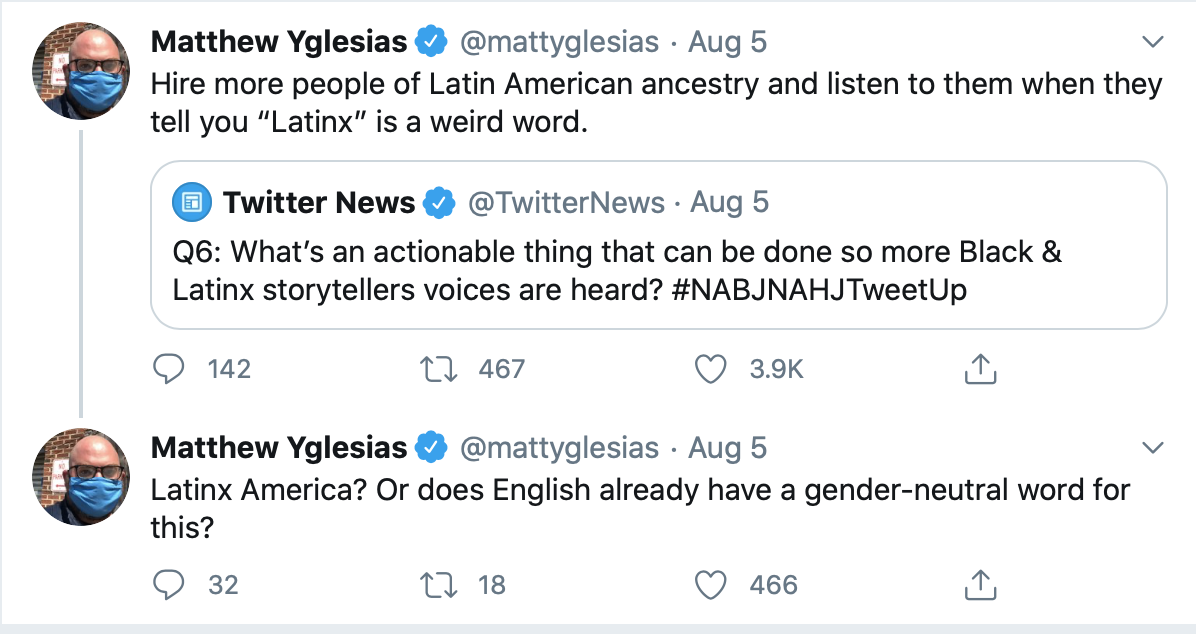 I don't think it would take too much introspection and self-awareness for people who think of themselves as woke to see how, well, linguistically neo-colonial this project really is.

Actually this isn't true. In Spanish and Portuguese, the -o version can have either gender-neutral meaning or male gender meaning, depending on context. I think it's more a continuation of the Anglosphere project of de-gendering professions and other labels.


Most Latinos don't know about it:

For all their fine talk, the woke are not above cultural imperialism. And like all imperialists throughout history, they have only the best of motives for the natives. Just ask them.