I think this makes me admit that I am now, officially such an animal.

Last Saturday, Mrs. Mark and I were innocently shopping for used records at our local record shop.

We had been in a few times in the recent past. The couple that own the place are super nice and enjoy talking about music, stereo gear, etc.

And he showed us to the table where this was sitting. 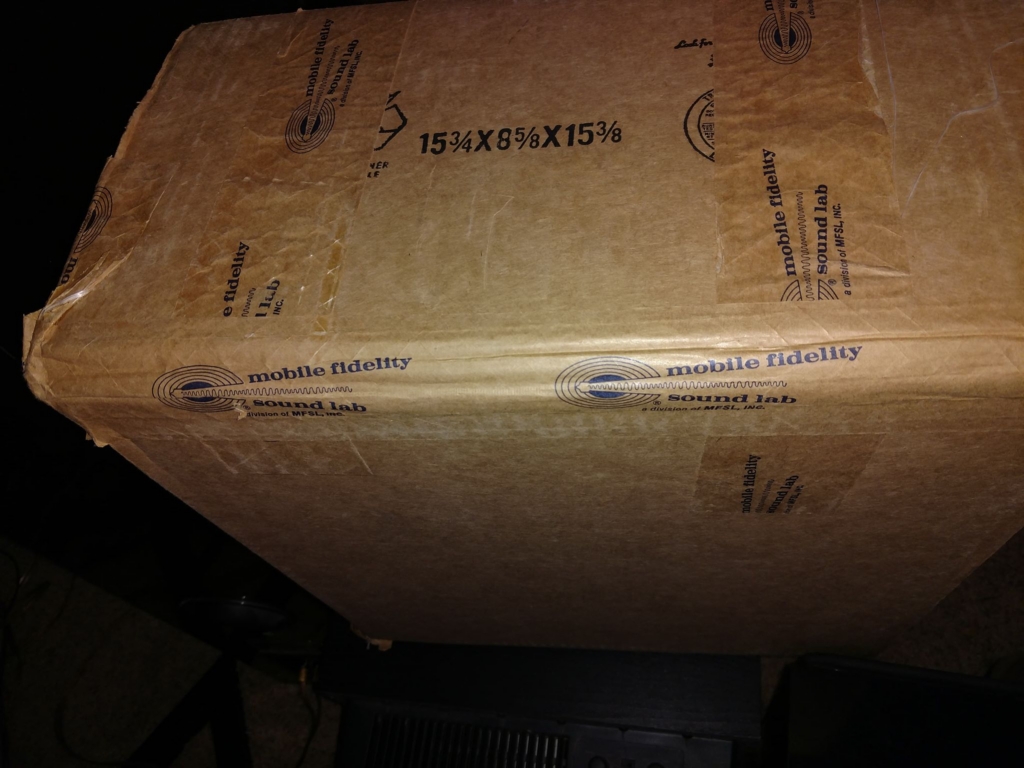 What exactly are we looking at?

Well! This is something very rare and very special. It's a Factory Sealed box from 1982. Inside are all of the Original Master Recordings of the Beatles studio albums, pressed and packaged by Mobile Fidelity Sound Lab.

The father of the record store owner purchased three of these brand new in 1982. He paid $300 each for them way back then. He opened one and has enjoyed listening to them over the years. The other two he stored in a climate controlled room and always stored vertically. He gave them to his daughter to help the record store. Whatever she got for them, would go into the business.

And now we own one. 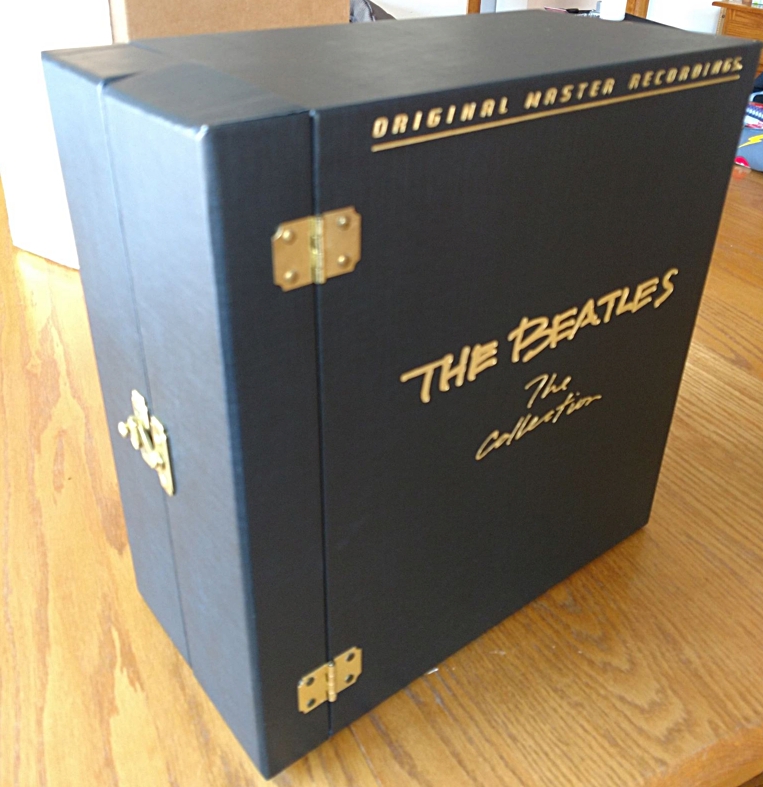 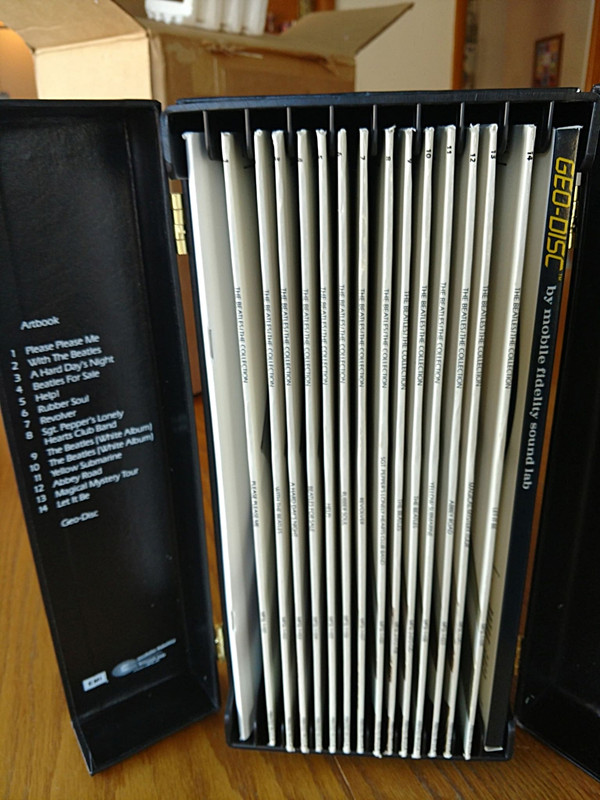 These are some of, if not the best sounding records I have ever heard. Complete silence between songs. The mastering of the pressings is as good as it gets.

We have been listening to one album every night since we brought them home last Saturday. Tonight it was Revolver. Tomorrow, it's Sgt. Pepper's.

Our record collection just jumped in value, considerably.  Depending on condition of course, I have seen this box set sell for as little as $500 but most pre-owned examples are in the $800-$2000 range. Unopened have sold for $3,800 and one is on the market currently with an asking price approaching $5k. They were asking $1,800 for the box. We offered substantially less and they accepted. We paid on the low side of the middle of the current used market. It was more than I ever imagined spending on any record box set, or even a Beatles box set. I am not even a huge Beatles fan. It was gift to the most special person in my life and the smile on her face and the continuing nightly smiles as we listen to these incredible albums, made it worth every last penny.

I have been enjoying listening to all of the albums so far. I had not heard several ( and I mean several!) songs before. They sure were a mixed bag. Most of their lyrics are just silly love and breakup songs. The "interesting" stuff is still to come in our Beatles listening marathon.

And, I am officially, a vinyl record collector.

Steve Miller
And you now have the perfect system to listen to them.

rontuner
I'll have to search for a picture of a basement of a friend from grade school - a wall of vinyl, floor to ceiling! My collection filled a whole car and got integrated into his when we downsized. Mine had more classical and jazz - the doubles were given away at a collectors party...

piqué
I kept all my classical vinyl. Some of it goes back to the 1950s and are among the first LPs. And I still have my grandfathers 78 collection. Some of those go back to the late 19th century, I believe. Still looking for a deal on a well functioning Victrola.

Im not a huge Beatles fan, either, but I imagine the quality of those recordings would still take my breath away.

pianojuggler
I wouldn't have the nerve to open it and play the records.

I predict that in the next month, you'll spend the equivalent of a semester at Yale on a new turntable, cartridge, and stylus.

CHAS
I should not be looking at this.

If a woman is eating ice cream straight out of the carton it’s best to just let her be.-Hank Wade

quote:
Originally posted by CHAS:
I should not be looking at this.

quote:
Originally posted by Steve Miller:
And you now have the perfect system to listen to them.

Just ask Ken. I don't think I will ever enter the rarefied air level of his stereo components.

Although he did/does? have a pair of speakers for sale I would like to check out after I recover from this purchase. lol

quote:
Originally posted by pianojuggler:
I wouldn't have the nerve to open it and play the records.

I predict that in the next month, you'll spend the equivalent of a semester at Yale on a new turntable, cartridge, and stylus.

They were made to be played and to be appreciated. Not stuffed in a box forever. The original investment would have paid off for the original purchaser. But then, he ended up giving them away so, he technically lost money on them. lol

They will never be sold until we go deaf, or dead.

And no, I like my Technics SL-1200 MK5 turntable with the Nagaoka MP-110 cartridge, just fine. Thanks.

Amanda
I'm mystified about how collectors of old vinyl records have managed preserve them without scratches - at least, enough to spoil the pristine sounds you all are extolling.

I have dozens of old LPs (mostly, folk music - in English and many other languages. Since my early teens, I've enjoyed music in what to most people are esoteric sources).

Not only my records, but much nostalgic (to me) music I find online from cultures and singers I've tracked down, are disturbingly staticky. I assume everybody has experienced the same difficulty with maintaining their old records without scratches. (It seems some more universally popular music - old Joan Baez, for example - has undergone a process of filtering out this annoying ambient noise - a technology must have been developed for this.)

Yet I haven't heard any of you refer to this problem, as much as I'd assume this was par for the course on aged LPs - that is, ones many decades old. How indeed could it be anything but inevitable over time, except for the rarity of unopened disks or ones owned by devotees who've treated theirs with loving ODD?

markj
Some of the vintage records I buy have static, or clicks, & pops, but the record can usually be cleaned vigorously (within reason or course), to eliminate most if not all of the unwanted noise. An occasional click or pop is part of the charm of listening to vinyl records. It takes me back to my youth when records were really all we had. I never buy an album with scratches on the surface.

The Beatles albums we just bought have no such clicks and pops. They are the most noise free albums I have ever heard.

pianojuggler
I have a Beogram RX2 that probably needs a new stylus and a much older Dual direct drive -- I think it's a 604. Both are connected to Carver pre-amps, a the B&O to a C-2 and the Dual to a C-1. They have quite pleasing, rich, and full phono stages, at least to my ear.

I'm in the process of rearranging the house and hope to end up with a new listening room in the basement where I can finally set up my Magnaplanars they way they should be set up.

markj
Ah! So you live in that rarefied air as well. Magnaplaners. Nice. My speakers are NHT VT-2 towers. https://www.nhthifi.com/products/11152-vt-2#specs

I connected my Sony CD Changer to the new amp to confirm that the phono pre-amp I am using is less than ideal. The mids are definitely muffled. I tried every setting I could on the phono-pre. No joy. I will have fun building my own. It is said that the AkitikA Phono Stage, competes very favorably with some of the more expensive phono stages out there. One reviewer said it was completely silent, as in zero noise floor, and how much more silent it was than another very expensive phono stage.

I just need to place the order and I will be building it this weekend.