quote:
He's back today and has managed to rent another car....

I'm going to h*ll because this made me

CHAS
Circumstances that are not rare enough.

jodi
Jesus. That’s terrifying. I am thankful my mother has no interest in driving, or even leaving the house on her own anymore. My father still thought he could drive. Pretty much til the very end.

The lady was taken away for evaluation in the mental health unit of the local hospital. She went ballistic and her husband called the police. Whatever she said to the police and paramedics allowed them to take her in for evaluation for up to 72 hours. She was there for ten days.

Her husband hit a curb with their car while she was in the hospital, damaging the wheels and suspension. He rented a car while his is being repaired and managed to scrape the wheel well on the rental. He returned the car to Enterprise and they wouldn't rent to him again; they actually drove him to Hertz.

He rented a car from Hertz about a week and a half ago and totaled it yesterday half a block from home. It's an intersection with a two-way rather than a four-way stop but all of us who live nearby know that people routinely run that stop sign so we're always on alert. Well, most of us are. My neighbor was speeding and the other driver ran the stop sign, and my neighbor t-boned the other car in the rear door. Technically it's the other driver's fault, not my neighbor's, but there's no way it should have happened. Airbags went off in the car my neighbor was driving and apparently he broke some bones in his hand; the other driver was not injured.

He's back today and has managed to rent another car....

On the plus side....the mason who came and rebuilt the outside brick wall on the garage did a stellar job. I got his name in case I ever need brick work done.....

quote:
Originally posted by Nina:
That child needs to be removed from there if his parents are unable/unwilling to ensure his safety. Spiral fractures are a classic indicator of abuse.

Second.
wtg
Went for a walk with a friend after dinner yesterday evening. Came home to eight cop cars plus an ambulance in front of the house next door. They took her away around 7 pm. She didn't go quietly.

Flashing lights and noisy diesel engines woke us up this morning at 4:30. Ambulance only, no cops. Ambulance took off with lights flashing. Lights left on in the house, no signs of activity.

I walked past the house a little while ago and this is what I saw: 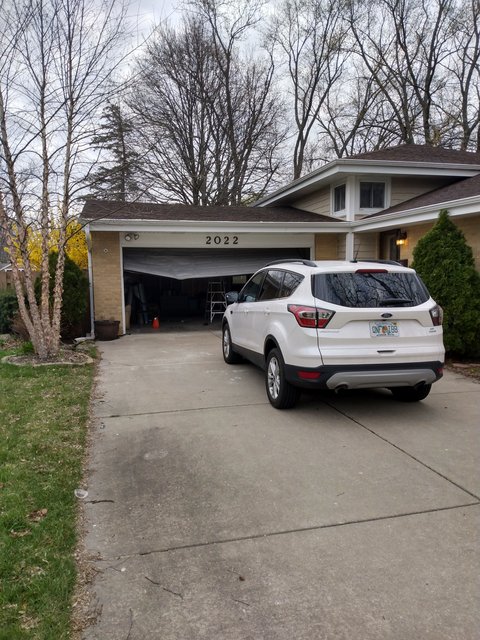 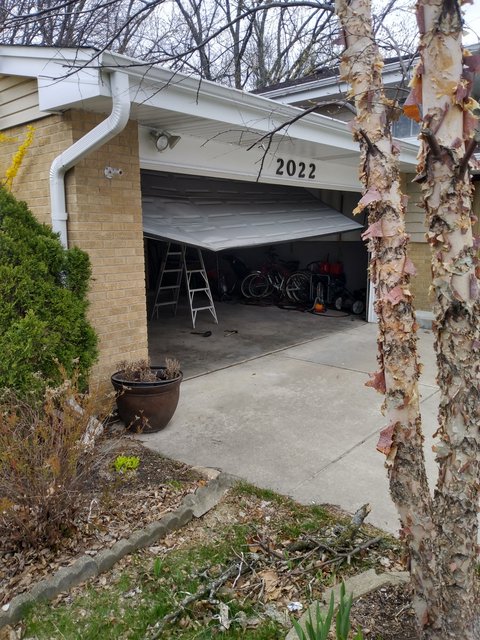 No visible damage to the front end of the car that I could see. Jury's out as to whether it was really an accident or staged so he would have an excuse to be taken to the hospital in the hopes he would see her.


CHAS
Hopefully there will be a change for the better at that house. Maybe the hospital will keep her.

wtg
She was there for 10 days about a month ago. Things were pretty much back to the way they had been going within a couple of days of her return home.

I was getting worried about the train wreck happening next door; it wasn't clear what the extended family was doing. Or could do, for that matter. I decided to start with the police and they put me in touch with a woman in the dept who works with domestic violence situations. She is working with my neighbors but of course couldn't talk specifics. The general message was that they're on top of things but sometimes the situation just has to play itself out and it may not turn out well.

We are all terrified that my neighbor will hit one of the four small children who live within two doors of him and who ride their bikes and scooters up and down the sidewalk. Clearly he's not competent to be driving anymore.

ShiroKuro
Ugh, I'm so sorry. I was laughing in a post above from a few weeks ago, but this really is no laughing matter.

I hope they get they help that they so clearly need and that in the meantime, no one else is impacted -- or at least, impacted any more than you and your other neighbors already are.

wtg
No worries. You have to find some levity somewhere, as my observation about finding a qualified mason demonstrates...


wtg
Interestingly enough, the garage door opener has been broken for a while; he's been opening and closing the door manually.

Mr Neighbor is back from the hospital and I just saw a pickup truck in the driveway. Looks like the garage door will be fixed soon. Hopefully he'll have a new opener installed at the same time.

We'll check out the garage door guy's work and see if his phone number gets added to the list the mason is on....


wtg
Well, the saga has come to a close.

Mr Neighbor went completely off the rails after his wife was hospitalized. He drove into the garage door. Again. Family made him return the rental car he tried to touch up with what looked like Wite-Out. That was my guess when I saw the white paint on the front of the car; it was confirmed when another neighbor found the empty bottle in his backyard.

He had a tough couple of days after he lost access to a car. Multiple police visits. He was clearly not able to manage on his own and ended up being hospitalized also.

We learned a few days ago that they are both in memory care and won't be coming back to their house. Family is here getting the house repaired and cleaned out, and it will be going up on the market. From what they said, the interior is a total disaster.

I feel sad for both of them but I also have to admit to feeling a huge sense of relief, both for them and for our neighborhood. We aren't all on edge, worrying and wondering what disaster might next befall them. Or perhaps one of us.

Hoping they find a little happiness, or at least peace, in their new place.


AdagioM
Memory care is a big step, beyond Assisted Living. Sounds like things were *really* bad over there.

I hope the great-grandson is doing okay.